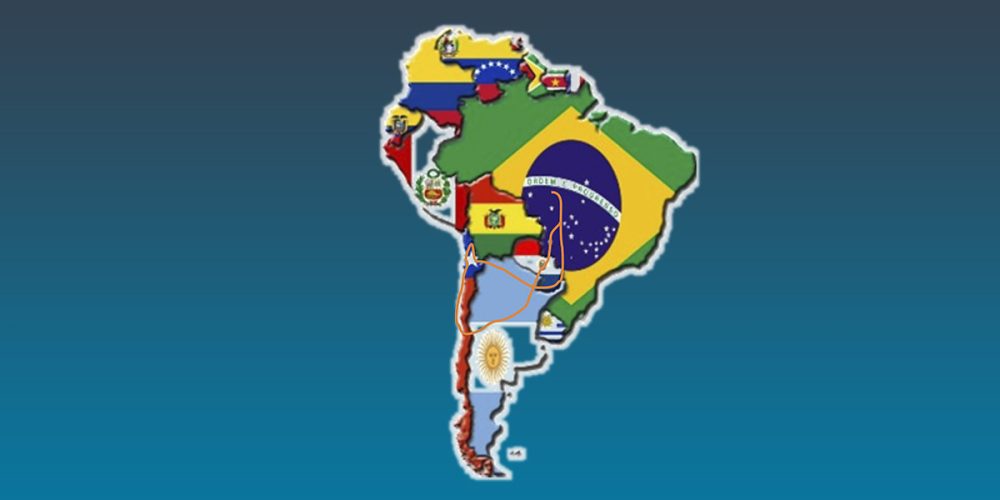 The Inter-American Development Bank (IDB) recently published the survey, “Forging opportunities to grow in the world,” an analysis of the state of the logistics industry in South America, along with a series of necessary recommendations to foster the industry which, at the regional level, presents some challenges that are somewhat difficult to overcome.  The following is the summarized situation of each country except for Venezuela and the Guianas:

The main challenge of this South-cone nation at the global level is its infrastructure. Argentina occupies position No. 68 among the 140 countries surveyed in this area by the 2018 World Economic Forum, behind Chile (41), México (49), and Uruguay (62). Investments in infrastructure barely represent 2.5% of the gross domestic product, and it would be necessary for the country to double this percentage during the next 15 years to close the gap. The quality of its infrastructure stock is less than expected, taking the country’s development level into account.

The recipe provided by the IDB is a mixture of policies ranging from updating marketing levels to attract investment to exploring sub-sectors with high growth potential.

A large territory, low population density, and the altitude of its main cities are the principal natural challenges of Bolivia, South America’s second landlocked country, a fact that considerably increases the costs of the transport of goods within its borders. There is good news, nevertheless. During the last few years, the country has adopted an active role concerning public investment with special attention given to infrastructure. Besides, the country presents, according to economist Silvia Quevedo Silvetti, “…great opportunities for investment.”

Recommendations:  To improve and maintain the condition of its roads (60% of which are unpaved) in upcoming years, to reduce transport costs, and increase the economy’s productivity.

Brazil’s logistics problems, according to the aforementioned survey, are systematic which is evidenced in the scarcity of long-term planning, the need for an integrated orientation, and the lack of boost of the sector’s specific projects.

Among the recommendations for South America’s “giant” are to support the transport sector through the construction of multimodal systems (to reduce costs) and to leverage from non-polluting energy sources, such as wind and solar energy.

The gaps in Chile’s logistics industry are diverse, presenting varying degrees depending on the sector. Regarding transport, the most visible hurdles are in the level of paving, followed by road density (vis-a-vis the amount of arable land) and the general quality of infrastructure. The situation is pointed out as a handicap for the movement of goods, a fact that also occurs in its railroad sector, which presents the lowest grades in infrastructure quality, followed by air transport, seaports, and roads.

The solutions proposed for the Andean country include, among other things, immediate investment in infrastructure taking into account the effects of climate change in the country’s basin systems; logistics, particularly multimodal capacity and connectivity including the development of ports and access infrastructure, and the elimination of funnels in urban and inter-urban infrastructure.

According to the survey, Colombia’s investment in infrastructure has been considerable in recent years, according to the report, reaching 6.5% of the GDP in 2015. Of said investment, more than two-thirds correspond to private investment (4.1% of the GDP) and has been mainly concentrated in the transport sector. However, the most outstanding challenges remain in the transport sector, reflected by insufficient funding and the low quality of highway infrastructure.

Solutions: To improve the current road grid, expanding it by 45,000 additional kilometers, in addition to developing logistics platforms that would allow cargo to increase in value. All of this would be possible through an investment increase in the transport sector, utilizing both public and private resources.

The IDB paper indicates that, although Ecuador presents great challenges in areas like access to electricity and mobile phones, transport is one of the areas that has successfully overcome deficiencies. Between 2008 and 2017, Ecuador moved up 71 positions in the highway quality index used by ICG, thus surpassing all countries in the region, with Chile being the only exception.

As for recommendations, the country ought to increase the efficiency of public investment and seek mechanisms to maintain the road network it has expanded during the last decade.

According to the IDB, Paraguay’s logistics industry has done little to overcome the natural hurdles of the country, one of two in the region without maritime coasts. The provision and quality of its transport, logistics, energy, water, and sanitation sectors are rather deficient, and the country stands as one of the last concerning the quality of its ports, roads, and airports.

Solutions: To prioritize investments that would upgrade the transport of goods, such as the construction of an inter-oceanic overland corridor (facilitated by the country’s geographic position in one of the narrowest points of the region) and the strengthening of the logistics sector with a long-term vision.

One of the countries that received the highest grades was Peru, which has seen the movement of its maritime industry grow tremendously. The survey reveals that investment in economic infrastructure has been quite significant in recent years, reaching a total of 13 billion dollars in 2015, which represents 6.9% of its GDP. A clear example of said investment is the construction of the Port of Chancay, located 78 km north of Lima.

The Peruvian challenges, nevertheless, are found in various transport sub-sectors (roads, trains, and ports,) presenting problems in both logistics as well as in structure quality. According to the World Economic Forum, this Andean country occupies position No. 85 out of 140 countries.

The recommendations given by the IDB to Peru are related to two main axes: the adjustment of management models to support planning, and to prioritize investments in infrastructure.

Uruguay presents a relatively favorable position on the IDB report, although it does present some negative points about infrastructure when compared to countries with similar per capita incomes, especially in transportation. Although energy exhibits a relatively small gap, energy prices remain high.

Among the ideas presented by the IDB for the strengthening of Uruguay’s logistics industry are the implementation of new overland transport technologies and the curtailment of both power consumption and emissions.